TMI Coatings, Inc. recently completed a project for the Sanitary District of Gary, Indiana at their West 3rd Ave. facility.  The project consisted of recoating the interior and exterior of a 50ft. methane gas spherical ASME pressure vessel.

Prior to accessing the sphere’s interior, TMI was tasked with purging the tank clean of methane gas.  The purge would allow safe entry into the sphere and provide an atmosphere suitable for paint application.  TMI pumped an allowable inert gas into the sphere which in turn dissolved and removed the methane gas atmosphere from the tank interior.  The inert gas was then vented from the tank and personnel entry was made.

Upon entry inside the tank, TMI installed a painter scaffold and began abrasive blasting the tank interior. TMI removed all existing coatings inside the sphere by performing a near-white metal blast in preparation for the new liner.  Two coats of a high solids epoxy novolac amine were applied which required a specialty spray pump to apply to the interior of the sphere to provide superior corrosion protection.

The sphere exterior was washed, power tool cleaned, and painted by TMI’s onsite crew. The new paint system was a two-coat overcoat including a high solids polyamide epoxy primer followed by a high-performance acrylic polyurethane finish coat.  Gary Sanitary District is currently designing an environmental themed logo that will placed on the sphere’s exterior.

Per Gary Sanitary District’s Assistant District Engineer, Eric Tonk, “The District was pleased with TMI’s effort on researching options of using exhaust from a diesel vehicle for the source of the inert gas as to the specified nitrogen gas.  TMI provided publication indicating the benefits of diesel exhaust (CO2) in this application of purging a methane gas storage tank.”  Mr. Tonk further noted, “The work was completed in a very safe manner, within budget and ahead of schedule.” 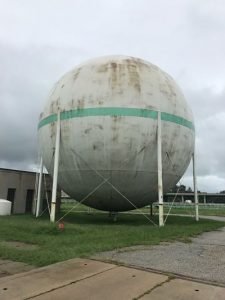 TMI Coatings was selected to prepare the surface and coat the exterior of (14) horizontal storage tanks including ancillary piping, valves, pumps, fuel skid equipment, etc. The tanks sizes were…

For the 6th consecutive year, TMI rode in the MS150 bike ride from Duluth to the Twin Cities. The ride found the team starting their trip early morning in the…

LET'S GET TO WORK

GET A FREE NO OBLIGATION QUOTE TODAY